Alfie Pryor is our candidate for the upcoming Sherwood Ward By-Election.

He has a wide background of experience in catering, the care sector and community work.

"There are a number of subjects that I have a particular interest in, including education, policing and violence, Jobs and the local economy.  Nottingham and Nottingham North are among the most deprived area of the country, where residents living standards have been deeply impaired by the decisions of the Labour Council for some 30 years."

"I would like to reduce the incidence of violence & sexual violence in Sherwood, as well as addressing the issue of Anti-social behaviour in the City.  Further, I would like to work with Police and Crime Commissioner to increase the visibility of Neighbourhood Policing for the safety of residents and visitors contributing to Sherwood's local economy.  However, there is an array of problems experienced by residents that I would take great pride in supporting a resolution." 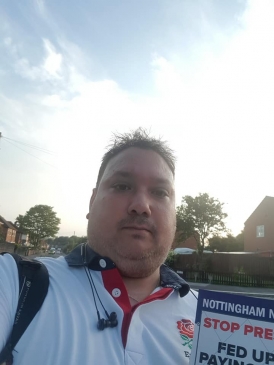